Osteoporosis impact on public health is sharply increasing justifying a significant effort to diagnose,  treat and understand this disease. Bones have been imaged with x-rays for almost a century and the basic technology for clinical imaged is well stablished, but with the recent development of large scale synchrotron light sources and high-end microfocus x-ray generators, imaging of the intricate bone inner structure with a few micron resolution become possible. Laser driven betatron x-ray sources were investigated as an alternative source for x-ray bone microscopy. A lenseless x-ray microscope was built and used to demonstrate the feasibility of high-resolution bone imaging in the Astra-Gemini laser facility (UK). A sample of femur trabecular bone was imaged from multiple angles and a 3D model of the bone was built using tomographic techniques to a resolution below 50 micron. This demonstration renew the interest in the development of compact laser-plasma electron accelerators and its applications. It also opens prospects for its use in clinic diagnostics in the medium term.

Plasma accelerators driven by intense laser pulses were proposed in 1979. However, the first useful laser beams were produced only in 2004 after ground-breaking experiments using the most recent laser technology. An intense short-duration laser pulse is focused to a light ball with dimensions of 50 micron or smaller leading to intensities above 1018 W/cm2. These light ball is made to propagate in a low density gas. The laser pulse strongly interacts with the gas ionising it and at same time expelling the plasma electrons from the propagation axis leading a positively charge bubble that propagates in the wake of the laser. This bubble attracts the expelled electrons back to the propagation axis creating an acceleration structure that propagates in the back of the laser pulse at a speed close to the speed of the light. An electron bunch can be trapped by this plasma structure and accelerated to relativistic energies in less than a centimetre.  This is possible because using an state-of-the-art intense laser an accelerating field of a Giga Volt per centimetre can be produced and sustained by a few millimetres. A radio-frequency accelerator uses a maximum electric field lower than 100 MV/m and would require at least 10 meters to produce equivalent acceleration. The injected electron bunches move longitudinally in the trail of the laser beam, but they also oscillate transversely in the radial electric field of the positively charged bubble. This oscillation produces a small divergence radiation beam with a synchrotron like spectra, when the electrons become relativistic this radiation become energetic x-rays, the beam divergence is a few milli-radians, the duration is similar to the original laser duration and the brilliance is enough for a producing an x-ray image in a single shot. 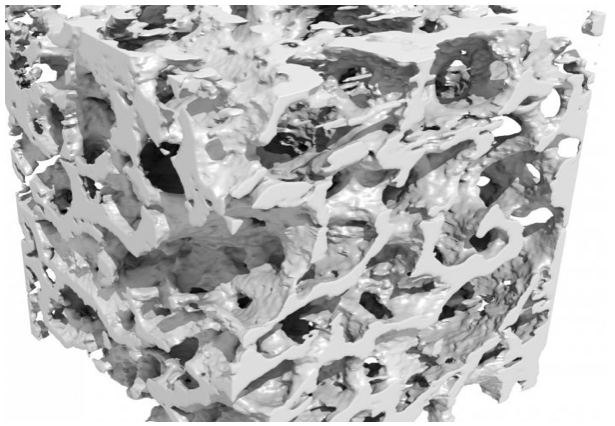 Another fundamental characteristic of the laser-driven betatron radiation is the reduced dimensions of the volume where it is produced. This volume can be contained in a cylinder with a few micron radius and with a few millimetre length. This source volume, when seen from the position of a small object left in the propagation axis at a distance a few tens of centimetres after the accelerator, will look  as a point and images of that object can be formed after the object without the use of any lens. This is very convenient since lenses or other imaging optics for high energy x-rays are at least very difficult and expensive to both produce and operate. Therefore, a laser-driven plasma accelerator with proper choosing of its parameters can operate as a x-ray microscope with capability to produce images of semi-transparent objects (for x-rays) in a few meters.

Even a small bone sample contains a very dense structure that is hard to understand by looking into a transmission radiography two-dimensional image. The visualisation of a complex three-dimensional structure becomes easier if a three-dimensional model is constructed using tomographic methods. In our experiment we have used 180 images of the bone sample obtained by rotating the cylindrical bone sample by 1 degree between single shot exposures. The image is a cut of the tomographic model resultant from those images. The model allow us to visualise the bone structure and see details as small as 20 micron.